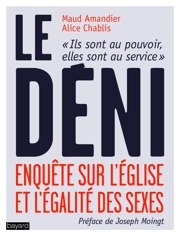 This book is a thorough and relentless investigation into the organization of power within the Catholic Church, based on the detailed study of Vatican texts, on the history of Christianity and society, and of symbolic representations of gender and power.

This inquiry takes apart the patriarchal model defended by the Church, which is still very much alive. This system is not only based on the unfair male domination over women, but also on a denial of sexuality which has tragic consequences on society.

The book unmasks stereotypes and prejudices rooted in people’s minds, which allow discrimination to survive. « Denial » invites readers to stop fearing equality and to abandon archaic, hierarchical systems, based on separation and exclusion.